Woodbury continues to experience strong demand for new commercial construction. In 2020, building permits were issued for five new commercial buildings totaling 172,865 square feet of space. These buildings boasted a permit value of more than $18 million, and brought the total cumulative square footage of commercial space to roughly 11.4 million square feet. More than ninety-five % of the new commercial space permitted in 2020 is non-retail, consistent with the City's goal of creating more employment opportunities in Woodbury. The chart below illustrates the cyclical nature of the economy with 2015 through 2017 experiencing higher than typical construction given the recovery from the Great Recession, as well as the beginning phase of the CityPlace redevelopment. During the 2011-2020 decade, eight new commercial buildings were added per year, on average, to the City. In addition, another significant project constructed in 2020 was the City of Woodbury's temporary water treatment plant, a 9,610 square foot facility built at 1981 Tower Drive. As a government building that does not add to the tax base, this project is not included in the chart below.

To view current commercial and residential projects in Woodbury, see the Development Map. 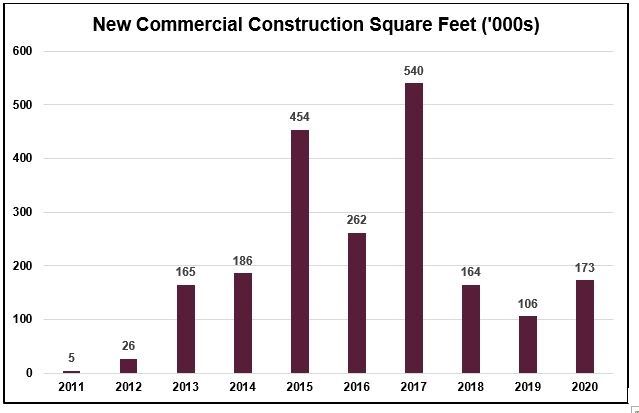