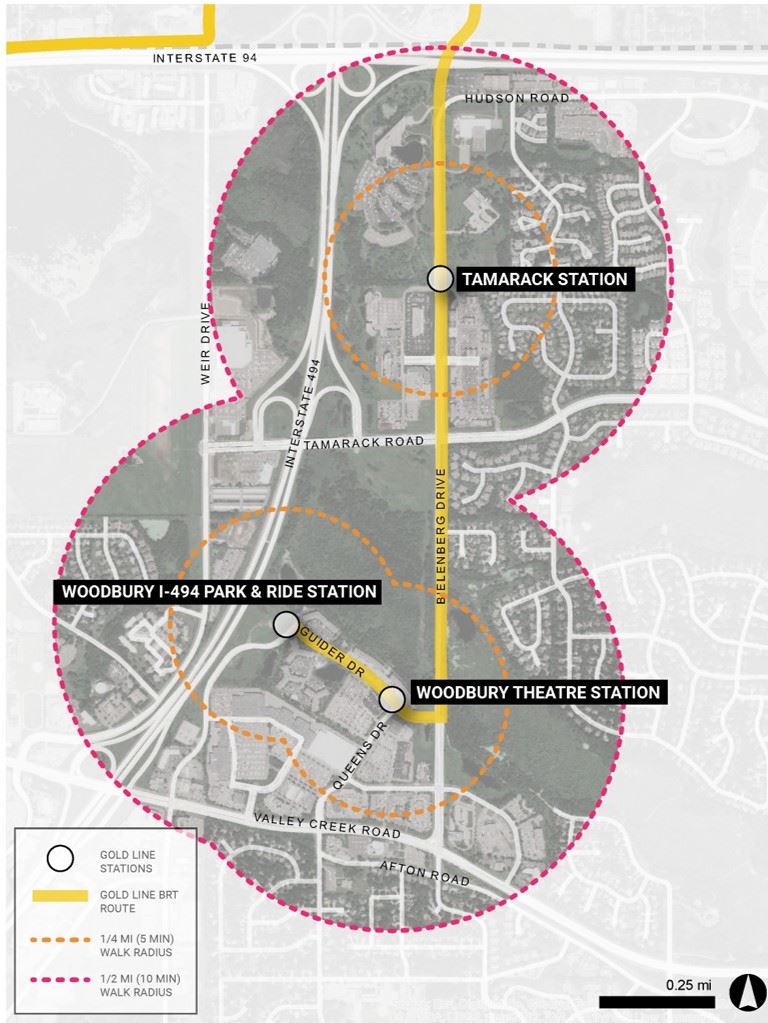 The METRO Gold Line is a planned ten-mile Bus Rapid Transit (BRT) dedicated guideway that will connect Woodbury to Saint Paul and other eastern suburbs which is planned to open in 2025. In Woodbury, the Gold Line would run north-south following Bielenberg Drive then turning onto Guider Drive, where the corridor ends.

The purpose of the City’s master plan is to determine the appropriate land uses around each of the three stations, optimize existing development, prepare for potential redevelopment, create a unique sense of place with landscaping and lighting fixtures, and enhance connectivity within the area. See below for the final report approved by City Council April 13.

The City has received resident, property owner and business owner input throughout the master planning process and most recently on the draft report. The meetings that have occurred for the master plan include:

A summary from each engagement effort was provided to both Planning Commission and City Council.

For more information on policies, goals, and calculations of land use needs for the city-based upon growth projections for population, households and employment, visit the 2040 Comprehensive Plan page.

What is the Gold Line?

The METRO Gold Line is a 10-mile dedicated Bus Rapid Transit (BRT) line being planned by Washington County, Ramsey County, and METRO Transit that will connect Woodbury to St. Paul and other eastern suburbs. The Gold Line will provide frequent, all-day service in both directions, seven days a week, and will connect with the growing regional transit system.

The Gold Line corridor is proposed to generally run along the north side of I-94 from the Union Depot in Saint Paul to Oakdale, then cross over I-94 on a new bridge connecting Helmo Avenue and Bielenberg Drive. Once the Gold Line enters Woodbury, it would run north-south following Bielenberg Drive, then turn onto Guider Drive toward Woodlane Drive and I-494, where the corridor ends.

Questions can be directed to Liz Jones via email.

When is the Gold Line anticipated to be operational?

Construction for the Gold Line is scheduled to begin in 2022 and is expected to be in service in 2025. 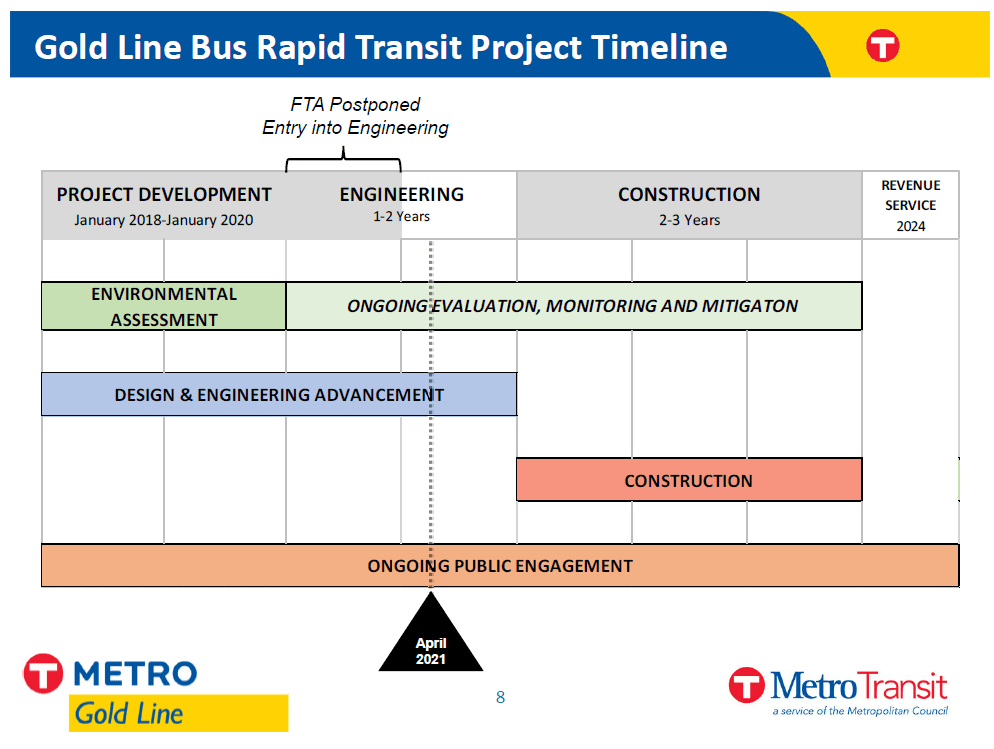 Why does the City support the Gold Line?

The city's support for the Gold Line is firmly connected to its commitment to providing an effective transportation system that serves community stakeholders and better connects the city with the rest of the region. The Gold Line would provide additional transit access and reliability between the eastern suburbs and the growing regional transitway system.

Although private cars are the most commonly used mode of transportation for many Woodbury residents, public transit is an important alternative to automobile use and serves as one part of a multi-modal transportation strategy for the community. The Gold Line will offer new opportunities for residents, employees, and business owners by strengthening connections between eastern suburbs and St. Paul, including access to jobs, housing, services, and recreation/entertainment.

What is the City's role?

Transit is considered a regional system, and as such the Gold Line is under the purview of the Metropolitan Council, the region's metropolitan planning organization. It is the lead agency responsible for design, engineering, environmental review and community outreach as well as building and maintaining the line. The Gold Line project team includes staff from Metropolitan Council, Ramsey County, Washington County and MnDOT. Metro Transit, which is the primary public transportation operator in the Minneapolis St. Paul area, will operate the Gold Line.

The City of Woodbury's involvement has been as a stakeholder and the City Council has adopted a resolution, which outlines the city's priorities as they relate to the Gold Line project. In addition, Woodbury staff have served on advisory committees throughout the design process to help advance and refine the design and ensure that issues unique to Woodbury are being addressed.

How does the 2040 Comprehensive Plan provide guidance and support for the Gold Line?

The city's support for the Gold Line is firmly connected to its commitment to providing an effective transportation system that serves community stakeholders. The 2040 Comprehensive Plan affirms this long-standing commitment through its guiding principles, one of which is to:

"Plan for an effective Transportation System"- Woodbury is dedicated to providing diverse and effective multi-modal transportation systems that ensure the accessibility and connectivity of community amenities. As the city evolves and transportation needs change, Woodbury must ensure that the transportation system serves community stakeholders. Growth will increase demand on the existing and future roadway system, and it will not be possible or desirable to accommodate this demand solely by building larger roads. While the city will accommodate the demand for safe, well-maintained roadways, it also recognizes that creative solutions are necessary that balance safe and efficient transportation with other aspects of quality of life in Woodbury, such as aesthetics, stormwater management and adjacent land uses. The city believes alternative forms of transportation such as busing, biking, and walking are essential to the quality of life in Woodbury. As such, the city will continue its commitment to pedestrian accessibility and actively participate in efforts to expand regional transit systems that serve Woodbury and the eastern metropolitan area. (For more information please see Chapter 7: Transportation (PDF)

Chapter 4: Land use (PDF) of the 2040 Comprehensive Plan (see pages 55-58) also outlines goals and policies related to the work that the City is doing on the Gold Line Station Area Master Plan.

The addition of all-day, bi-directional transit to these three station areas provides a unique opportunity for the city to optimize the potential development or redevelopment through the master planning process. The city will use this process to study and secure the appropriate combination of land uses for each station area based on each area's unique development opportunities, market conditions, and ridership potential. Master planning at the station areas will promote cohesive architectural identity using building materials, landscaping and other architectural or streetscape features to create a unique sense of place.

I've been reading about development along the Gold Line corridor. How will existing businesses, like the Woodbury 10 Theatre, be impacted by the project?

The City of Woodbury has been developing a master plan for the station areas along the Gold Line corridor. The plan does not propose to acquire any properties or close businesses. The plan will include land use recommendations and zoning regulations that will guide potential new development or redevelopment for the area and will enhance connectivity for existing businesses along the corridor.

In regard to the existing Woodbury 10 Theatre, there is a station planned to the north of the theatre, which would not impact the theatre site itself. It is anticipated that the future zoning will identify the theatre as an allowed use as the city views it as a complementary use to the proposed transit. Both the Woodbury 10 Theatre building and site are owned by the Metropolitan Council, and there is a lease between the theatre operator and the Metropolitan Council. The Station Area Master Plan will consider possible development scenarios in the event that either the land owner or the business operator determines that redevelopment should occur.

Why is the Gold Line project moving forward when transit ridership Is down due to the pandemic?

"Today, as COVID restrictions are slowly relaxing and as we navigate our new normal, Metro Transit continues to look beyond the pandemic to build the transit network of the future and be a part of our economic recovery.

The METRO Gold Line and Bus Rapid Transit are part of transit's future, providing a frequent, all-day service. During the pandemic, the existing BRT service had some of the highest essential rides. After the pandemic, ridership projections show that people will return to transit and will seek high-quality options with frequent service.

After the pandemic, Gold Line project partners know that even more people will need to get to work, education opportunities, daily errands, and appointments, as well as recreation. As residents adjust to new working styles, commuting patterns are likely to look different. The fast, frequent, and all-day service of the Gold Line will provide residents the flexibility to ride anytime, without a schedule."

How has information been shared with the public regarding the Gold Line Project?

Planning for what would ultimately become the Gold Line began in 2007, with the I-94 Corridor Transit and Transportation Study. As the project has evolved over time, the City Council has discussed this item at many council workshops and meetings. As of January 27, 2022 there have been numerous public meetings about the Gold Line, all of which were noticed and open to the public:

Information about the Gold Line was also shared through the City Update newsletter, which is mailed to every address in Woodbury. Since 2011, there have been 14 articles. The city has also used various social media posts to update the public on the project.

In addition to the city meetings and outreach, the Gold Line Project Office has held a robust public engagement process, which involved open house events, 'pop-up' events at various locations and community events, booths at the Woodbury Community Expo and Woodbury Days, etc. The Gold Line's public outreach can be found on the Metro Transit website.

How much will the Gold Line cost and what are the City costs associated with the project?

As of April 5, 2021, the Gold Line Project Office has reported an estimated cost of $531.9 million, with 45% of the funding expected to come from the Federal New Starts program. The remaining 55% of the funding is split between a variety of mostly local funding sources including the two counties, Ramsey and Washington, and the State of Minnesota.

While the vast majority of the cost of the Gold Line are being born by other governmental agencies as noted above, the City of Woodbury will have some cost obligations as it relates to the Gold Line project.

What are the Gold Line ridership projections?

The Gold Line ridership has been evaluated with a number of different ridership models over the past several years. According to Gold Line Project Director Christine Beckwith, "The federal "STOPS" model projects between 6000 and 6500 rides per day. When Gold Line begins operating, it is projected to be one of the region's top ten busiest bus routes."

Based on the FTA STOPS model, the following estimates have been provided by the Gold Line Project Office on riders per station:

Jobs adjacent to the stations (data from the U.S. Census Bureau, Center for Economic Studies, 2016):